For many years there was a popular crime-solving drama on television known as CSI that focused on a team effort to scour messy murders scenes for evidence. The focus of Crime Scene Investigation stories was big cities; however, in our bucolic neighboring Shenandoah Valley, our community is preparing for crimes of a different nature.

In response to the impending Atlantic Coast Pipeline, a CSI known locally as the Compliance Surveillance Initiative has organized. This response was launched to monitor the destruction expected on our landscape and report evidence of environmental law violation and regulatory non-compliance.

CSI is a citizen initiative created by the Allegheny-Blue Ridge Alliance to monitor construction activity of the pipeline planned in our neighboring community. This coalition of over 50 organizations in Virginia and West Virginia believes citizen oversight of pipeline construction is required. Rick Webb, a retired University of Virginia environmental scientist, is leading the CSI program. “We strongly believe the ACP is unneeded and cannot be built safely without causing permanent damage to the environment, particularly critical water resources,” Webb said.

The Pipeline CSI is gathering data and assessing the landscape that ACP is planning to cross. The effort will involve volunteers in Virginia and West Virginia performing water quality monitoring and reporting ground observations of pipeline construction. Aerial reconnaissance, using both planes and drones, is a large part of this program. The CSI is focused on the mountainous areas of the pipeline route where they believe construction poses the greatest risk to water quality. Results from the information gathered will be shared with regulatory agencies, the media and the public through CSI online resources.

Ben Cunningham, an Afton GIS analyst, the Virginia Field Coordinator for CSI, trains volunteers on the use of drones and facilitates online reporting of citizen observations. Public training opportunities have been offered by the CSI in West Virginia, Bath, Buckingham, Augusta and Nelson Counties. The program continues to organize and lead workshops for Pipeline CSI Volunteers.

Webb gave a program introduction to a group of more than 50 people attending the latest CSI workshop held at Rockfish Valley Community Center in Nellysford in October. Joyce Burton, Landowner Liaison with Friends of Nelson, provided the group with examples of ongoing organizing in Nelson. Cunningham then followed up with a demo of their online mapping system, a public GIS. Kirk Bowers, Sierra Club’s Pipeline Campaign Manager and a retired engineer, showed many views of what observable violations may look like during construction.

Friends of Nelson has been an active anti-pipeline organization since Dominion first sent notices about plans for the Atlantic Coast Pipeline. They provide a weekly informational presence at the Nelson Farmers Market and are the source for those ubiquitous blue No Pipeline yard signs. The September FON meeting offered an opportunity to hear Ivy Main, a speaker from Sierra Club, and Rick Cornelius, an environmental lawyer, speaking to a large crowd at Rockfish Valley Community Center. Cornelius provided an update on current key cases ready to be heard in court. Main identified steps to a carbon-free energy system in Virginia by removing barriers to residential solar.

Recent public events also included the installation and unveiling of an eight-foot-tall and eight-foot-wide sculpture called “The Defenders.” The first in a series of five sculptures on the proposed pipeline route was recently at Rockfish Valley Foundation Natural History Center on Route 151 in Nellysford.  The second installation along the path of the pipeline is at the Stuarts Draft Farm Market on Route 340.

The first three weekends in October, Friends of Nelson sponsored the “Spruce Creek Gathering,” hosted by Jill and Richard Averitt. The public was invited to camp and enjoy the Averitt’s Nellysford property along the proposed pipeline route. Averitt noted, “Thirty to seventy people attended including those from Virginia coastal communities, Norfolk and Hampton Roads with others from as far away as North Carolina and Oregon.”  A mix of guest speakers, including Ernie Reed, Nelson Board of Supervisors and Rector Weston Mathews, Interfaith Alliance for Climate Justice. Many participants shared meals and nature walks with the invitation “to experience the beauty of Nelson County camping on a private property directly in the path of the proposed pipeline.”

For more information and to volunteer go to www.pipelineupdate.org/csi. 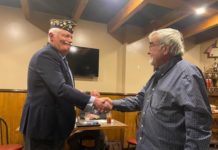